Hardest Job of All

Yes, this is going to be another non-writing, non-book post. Once more, I'm diving into mommyhood and all that goes with it.

When you work full-time and have kids, it does feel like you have no time for yourself. Here's the thing about stay-at-home parents: they don't have time for themselves, either. They're constantly dealing with one child-related incident or another. Keeping a clean house is more difficult because the kids are there more, therefore having more time to mess it up.

I'll admit, when I decided to be a 'stay-at-home mom,' I thought it would be a lot easier. That I'd have more time to get things done and more flexibility. Needless to day, I was wrong. Entertaining two young children 24/7 is a lot more wearing on a person than doing it for only a few hours a day. You know how you get tired of playing the 'WHY?' game after 10 minutes? Imagine doing it ALL DAY.

I've also learned that when my kids have tantrums, meltdowns or generally a bad day, it all comes down on me. Before, when they went to daycare and I went into the office, I didn't have to deal with all the crying fits and arguments that our poor daycare provider did. Let me tell you, when you have to deal with meltdowns three times a day, sometimes for the stupidest things like they want a piece of string, you will suddenly appreciate your daycare provider a LOT more.

Another thing about STHPs - they don't get much adult interaction. It's one of those things I miss about working in an office. Now I spend my days with only my small children to talk to. While I love them and some of the crazy things they come up with, talking with grown-ups is nice, too.

Some of you are now saying, "But I thought you had a full-time job." I do. However, my full-time job is taking care of a severely autistic adult. While it allows me flexibility to bring my kids to work and sneak in some writing time, it doesn't allow for the same interaction I had working in an office environment. The most intelligent conversation I get usually involves why they colored a purple dog.

I know balancing work, kids and housework isn't easy,either. Like I said, I've been on both sides. All I want you to do is think about this before you start spouting off how much harder you have it.

I'm sorry. I missed this week's Nerd Cat Diary. It isn't as easy to convince Toothless to pose as I thought it would be. She's great when I don't have the camera, but as soon as she see me take it out, she's gone. She doesn't like photographic evident of her existence.

So, in a gesture of goodwill and humble apology, I would like to give you all a peek at my current WIP. (Work-in-Progress for everyone who thought I left out the 'h' and things were going to get a little wild here. Sorry to disappoint yet again. ;-)

Anyway, if I'm lucky, Toothless will cooperate over the weekend and I'll make up the missing installment. Until then, enjoy this chapter from PROMETHEUS' LANTERN. 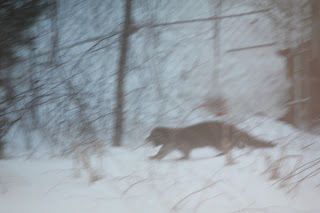 I have seen my first Wildling. They're bigger than I expected. I wouldn't say it to any of my brothers in black, but they are terrifying. I hope we don't come claw-to-claw with them. 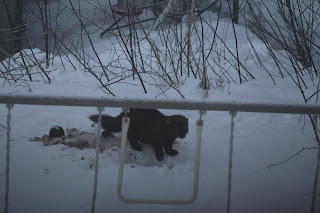 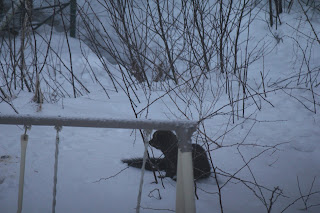 The wildling has been circling near the forest border. Allowing the trees to encroach on the land so close to the Wall is now a weakness. Their movements are hidden from us as are their numbers. We have only seen the one, but there is no doubt more wait in the shadows.

The amount of snow so recently fallen should have hindered the Wildings, but it appears to have aided them. Overnight a small fortress has appeared, made out of the vile white stuff. They have also put up animal pens and the sounds of chickens is evident. What could they be doing?
Posted by Emily McKeon at 10:44 AM 2 comments:

Hope You're Having a Lovely Day

Happy Valentine's Day! Even if you don't have a 'someone special' to share it with, make the most of it. I know a lot of people will go out and do things in groups, celebrating their singleness. Do it! Go to the movies with friends to see that movie you wanted to watch. Go bowling. Eat out and don't worry about having to share your dessert or having someone steal all your fries. (Unless your best buddies do that anyway. I can't help you there.)

I think we focus too much on the 'couples' aspect of Valentine's Day and not enough on the 'love' part. There are more people in your life to love than a significant other. Use today to show them you appreciate them. Whether it's your best bud who's always there for you or a family member, make them your Unofficial Valentine (or Single Awareness Buddy if you prefer) and have fun.

I know some of you are also of the mindset that we should show our love and appreciation every day of the year, not just one day. I agree. Don't forget your loved ones and scramble to make up for it today. But, I also think having one day a year set aside makes us focus more on those we care about. Life gets busy and having a 'no excuse day' helps make sure we shower them with a little undivided attention.

So this Valentine's Day, be creative with your celebrations. Whether you celebrate with a significant other, group of friends or family dinner, make it special. You don't have to follow the chocolate/flowers/card/ expensive jewelry trend. Make it personal. Cook dinner yourself or make your own card. There's no need to let Hallmark and Russel Stovers get all the credit.

Most important, let someone know you care about them.

Happy Valentine's Day!
Posted by Emily McKeon at 11:41 AM 2 comments:

Today is a sad day. Buddy, one of my brothers in black has fallen ill. The disease is unknown and even the maester is unable to cure him. I have left my post on the wall to watch over him.

While I sit by his bed, I can hear the maester and the commander talking in hushed voices. The maester may be able to treat Buddy, but needs to purchase herbs in order to try. The herbs are going to cost Castle Black quite a bit of money. The maester would like to try but the commander doesn't think we have the resources.

Quietly, I slip away. I must talk to my brothers if we are to save one of our own.

******
Serious time. There really is a BuddyCat and he is in need of testing. He belongs to the lovely Colleen Lindsay. For those who don't know her, Colleen is part of BookCountry.com, active Twitterer and all around nice person. Heck, she's put up with me stalking her on Twitter and showing up to pester her at NYCC.

Friends of hers have started a donations page to help with the costs of Buddy. They're asking for people to boost the signal, even if they don't have funds to donate themselves. Already they're nearly halfway to their goal.

If you want to help, visit Bucks4Buddy. Read the story, donate or just help boost the signal.