Guess what today is!!

Today WHAT THE TOWN KNEW goes out into the world. It's been a long journey, but I'm finally at the end. (Well, sort of the end.) Now the remainder of the journey is in the hands of the readers.

Want to get your own copy? It's available in both paperback and Kindle formats. Don't have a Kindle? No worries! You can get it in other e-book formats.

To all of you who encouraged me along the way, thank you! And Happy Reading. 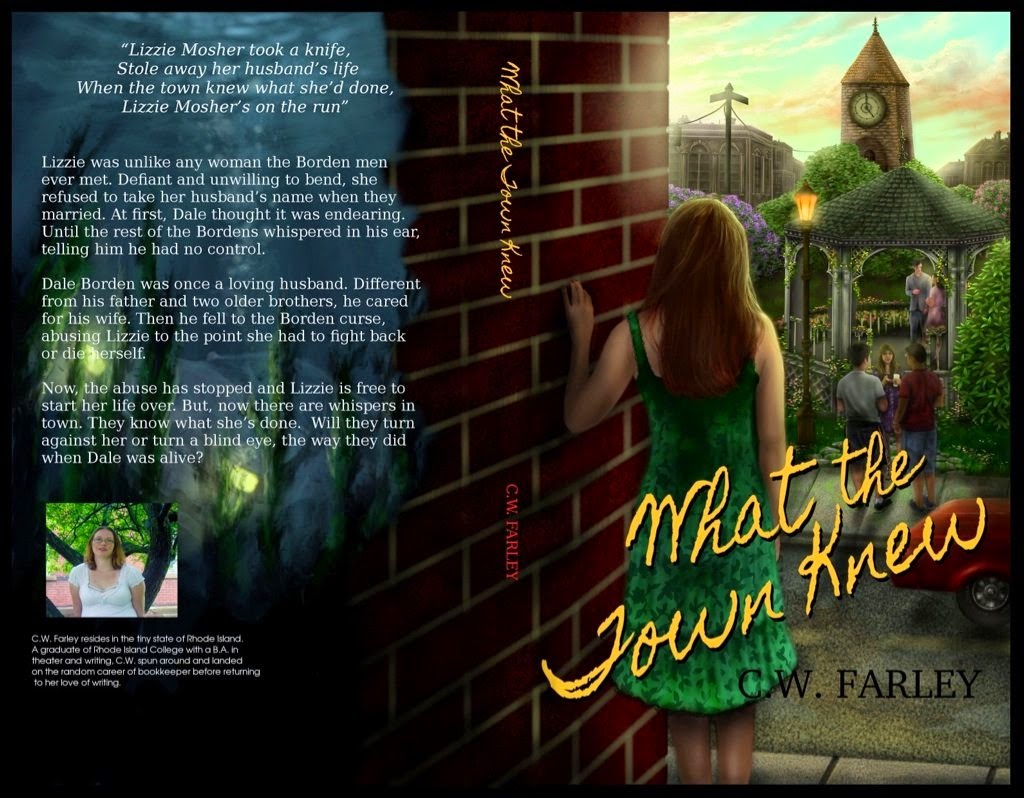 Posted by Emily McKeon at 11:13 AM No comments:

The jousting lead was a bust, although it did show me a hidden side of my junior detective.
“Sir, the Doctor Dunn sent over the coroner's report for that girl. Would you like to take a look at it?”
“Thank you, Bobsy. Put it on my desk and I'll go through it as soon as I finish this doughnut.” Yes, I was still referring to him as Bobsy. I mean, who picks a name like that? I licked the jelly from my fingers and reached for the folder Earhart had placed in my tray.
“I didn't know there were doughnuts.”
“Cheever brought them in.” Earhart turned to the break room. “But there aren't any left.” I popped the last piece of sugary fried dough into my mouth and opened the report.
A heavy sigh came from Earhart's direction. He shuffled with his head down over to his desk. For someone who spent his weekends making people laugh, he certainly was a downer the rest of the time.
The photographs of the cut-up victim led to the near reappearance of the doughnut I had so recently enjoyed. Coroner's reports really needed to come with warning labels for people who had just eaten.
I flipped the pictures over so I wouldn't have to look at those gaping holes. Or the blood. Or the organs. Or the bones. Or the ---
“Detective Summerton, are you all right, sir?”
“Fine, fine.” I waved my junior detective off and swallowed. For the record, doughnuts don't taste as good the second time around.
The report itself didn't have much to it that I didn't already know. Cause of death was the obvious stab wound. She had died between nine and eleven the night before. The only new information was her name and address.
“Do you know where Serendipitous Way is?”
“Isn't that down near Memory Lane?”
I squinted at Earhart, unsure if he was making a joke at my expense of if he was serious.
“You know, sir, the street full of memorabilia shops.”
“Of course I know what you're talking about.” I huffed and stood, dusting sugar particles off my jacket. “I wanted to make sure you knew where it was since that's where we're headed.”
“What for?”
“Our victim's, one Natasha Nix, last known address was 10 Serendipitous Way. We're going to see if anyone there knows anything that could help us.”
“Or if any of them are jousters?” Earhart asked, pulling on his coat.
“Don't be silly, Earhart. It's a residence, not a barn.”
“Of course, sir. And sir?”
“Yes?”
“Can we stop for doughnuts on the way?”
I raised an eyebrow in his direction. “No, I don't think so. I'm still full from the ones Cheever brought in.”
Another heavy sigh from Earhart as he trudged out the door to the car. I followed behind, trying to figure out what people found so funny about him.
Maybe it was just his name that made the audiences laugh.

Chapter 5
A Brief Personal History of Our Suspect

Francis 'Bud' Finnegal wasn't born a unicorn. He never intended, or dreamed, that he'd ever become a unicorn.
Not that he was one now, not fully. Not yet. But soon, if Fredrick's experiments were to be believed. For now, Francis existed somewhere between the human he was born as and the animal he was slowly becoming.
Another thing Francis wasn't was a murderer. Well, not until recently when Fredrick started sending him out to keep the nosy people and the bill collectors off their doorstep. The bodies added up to several dozen over the last year or two. Most of those had fallen into the latter category. The two of them didn't make much money, one being a renegade scientist and the other a transitioning unicorn. Bill collectors didn't seem to care much about excuses, so they had to pay them anyway they could.
Fredrick preferred to pay them with Francis' horn through their heart.
This job and Fredrick had turned him into the professional killer he now was. The neon orange sludge at the back of the lab sink may have helped some. It was about the time the sludge appeared that Francis sprouted the horn and hooves.
If only he hadn't applied for the job under Fredrick. He needed the money at the time, How was he to know that Lab Assistant, No Experience Required would lead to a life of crime and unicorn-hood? But two years later and that's exactly where he was.
Monkeys in the lab next-door set up a shrieking cacophony, marking the end of a normal workday. In the hall, chatter from lab assistants and scientists who lived by the clock filled the air as they hurried towards escape. An escape not possible for Francis.
Since the sprouting of the horn, Francis had been forced to stay hidden. Most of the time he lived in Fredrick's lab, undisturbed. During inspections or the rare time when a top-secret project was being worked on somewhere in the building, putting security on high alert, Francis was expected to wait the time out in his sewer lair.
Lair. A unicorn with a lair. Weren't unicorns meant to have forests or glens or something more open? Who ever heard of a unicorn with a lair?
Then again, how many unicorns were running around free in the world? By Francis' count, only one; Him.
Francis let out a sigh. His whole life he wanted to be different. Seemed like everyone he knew was special in some way and he was only average. Well, he had his wish. You didn't get much more different than being a unicorn.
Only one problem now. As with so many others before him, Francis realized the folly of his wish coming true after it was too late. For the first time in his life, Francis wished to be normal.


Posted by Emily McKeon at 6:50 PM No comments: